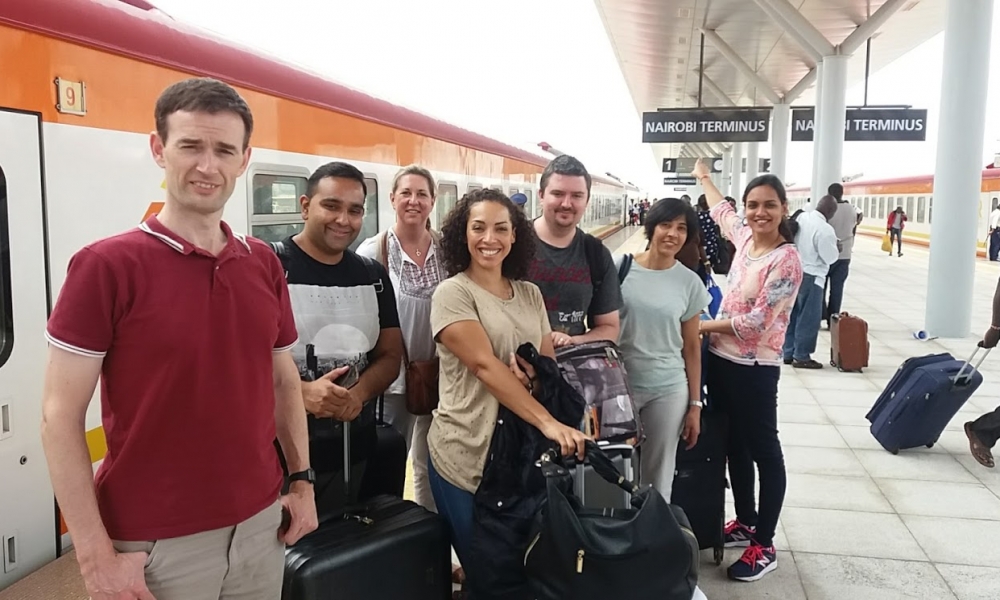 When planning an educational, one of the challenges we usually face is transfer costs, so when I heard about the Madaraka Express in Kenya I was really excited. This new train, which currently operates between Nairobi and Mombasa, stops half-way, near the Tsavo National Park, making it an ideal way to connect the beach with a safari.
Phase 1 of this project was completed in time for the elections in June 2017. The 300 mile long railway line, was built by China Road and Bridge Corporation, is 90 percent financed by China Eximbank, and is the largest infrastructure project since independence in 1963. The railway replaces the line built in 1895, between Uganda and the Kenya coast.
Being such a new project, they still have a few small challenges, but all in all, I would say it is a tremendously successful venture. I would even go as far as to say, that they could probably fill another train each day with ease – so I am hoping that more services will be offered soon.
Currently they offer a fast service between Nairobi and Mombasa return (non-stop) which departs in the afternoon and takes about 5 hours. A slower service that stops at about 8 stations, including Voi and Mtito Andei (allowing easy access to Tsavo), departs in the morning, and takes about 3.5 hours to/from Tsavo.
Our journey began in Mombasa, the train station is near the airport, so we needed to allow enough time for the traffic to get to the train station on time. Check in for the train needs to be at least an hour before departure in both Nairobi and Mombasa, because of the amount of security.

The security check includes all the bags being checked by specially trained dogs, and then going through two scanners. This double scanner is probably just to make very sure, nothing gets on board the train that shouldn’t.
I must say that travelling both in First and in Standard class feels safe, and fellow passengers are friendly. One of the challenges, particularly in Standard Class is space for luggage (this has not been carefully thought out). They do have space under the seats, which works if your bag is not too fat. First Class is not expensive (KSH3000 / GBP21), offers more space and a comfortable seat configuration, as well as a dining car – so is by far the better option. Standard Class (KSH700 / GBP5) is cramped, the seat configuration is not great, and snacks and food come from a trolley service that struggles to get through the overcrowded carriages.
Mtito Andei station is less than a 5 minute drive from the gate into Tsavo West, and Kilaguni Serena is about 30 minutes’ drive from the gate.
Tickets can be booked 30 days in advance of the return journey. Luggage should not weigh more than 30kgs and should not measure more than 1.6 m in height, width or depth (the smaller and more compact the better).
The next phase to improve the experience will include building power stations, to enable the trains to run on electricity, which will quicken the journeys.
Phase 2 of this project is underway, and will include a line west from Nairobi, which will link the capital with the Naivasha and Kisumu and onto Kampala.

Be Brave and Carry On